Last weekends Comikazie was to say the least quite interesting. The convention promoters boasted fifty thousand people in attendance. Well, yes, they were able attract a lot people to the convention center, but I don’t think it was close to that number. The people that did come were an army of looky loos. It was mostly kids in elaborate and clever costumes playfully mugging for camera phones. Many of them liked viewing the vintage collectibles, but had no money to buy them. So for us at the Oddball Books booth, it was a little on the slow side. However, we had a plentiful supply of bud lights, rum cokes and cheez-its as well as Maria, Barbara and the Coop Devil Girls as company. 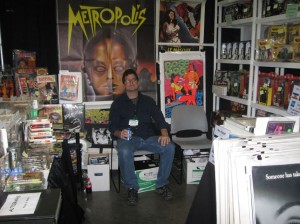 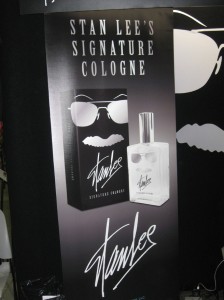 Sadly, I didn’t manage to get anything signed or meet the legendary creator of Spiderman. Because Stan Lee is getting up there in years, he was only there for a few hours a day and sixty bucks for his signature was a major factor in motivating me NOT to stand in his signing line. However, I did pop by is his perfume booth. Gez, you can smell like a comic dealer or worse a ninety year old man…….

What can I say….. The George Barris coolish-ghoulish MASTERPIECE on display! 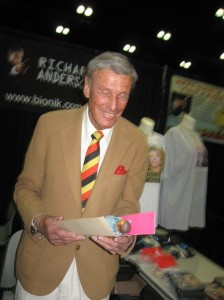 Richard Anderson who played the character Oscar Goldman in both the Six Million Dollar Man and The Bionic Woman television series was so happy to see his doll when I brought it to him for his signature that I thought he was going to start cradling it. 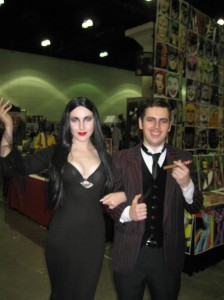 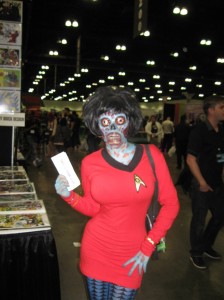 Funny, when I met Nichelle Nichols she didn’t look like that….

I only got to one panel discussion. It was on the Grindhouse Film Festival hosted by Eric Caidin owner of The Hollywood Book and Poster Shop. It’s a monthly 60s- 80’s exploitation film fest at the New Beverly theatre. They show tons of rare over the top, blood and guts flics, mostly from 35 mm film prints and many from the Quentin Tarantino collection. For more information and to get on their email list, check out Eric’s web site.

A lively audience packed into Book Soup in Hollywood recently to meet and listen to two of Hollywood’s big names in television comedy. Richard Kramer and Peter Mehlman not only read from their new books, but took turns in a wide-ranging discussion of television, comedy, and writing, engaging the audience in a marathon session that could serve as a self-contained college course on the subjects covered. If you missed the event, no problem, just click on the window below to view the unedited presentation, over 2 hours long. Also, follow the links below to get signed copies of their books and visit their websites.

Click Here to buy their books from Book Soup .Please support this great Independent Book Store. The internet discounters do not ever give the authors the love and kindness that they get from Book Soup. These educational and fun events allow you to personally meet up with the great authors of today and interact with them. Plus, get a signed copy as a gift for a friend!