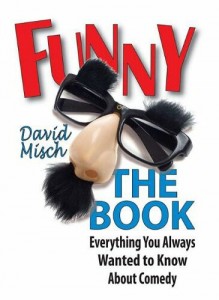 A Review by Five

In FUNNY: THE BOOK, thirty-five year show business veteran David Misch went deep undercover to investigate the secrets of comedy, while producing a very humorous page-turner in and of itself. His mission was to explore the origins, definition, rules, and purpose of comedy, as well as what it tells us about the human condition.

In an attempt to explain the history of Ha!, the author writes, “Humor was probably invented by a Neanderthal who tripped over a log to amuse his cave-mates, then fell into the fire and burned to death, thereby inventing irony as well.” Whether this is true or not, one can only wait for the invention of a time travel device to either substantiate this theory or debunk it altogether.

(And speaking of history, for those who are curious about the oldest fart joke on record, according to Misch it goes back to the ancient Sumerians in 1900 BC. To hear, rather, read the actual joke, the author expresses his heartfelt wish that you lay down a few bucks and purchase the book. )

A thorough guided tour of early Hollywood rounds out the historical perspective of FUNNY: THE BOOK, complete with scores of anecdotal stories about the tricksters and early stars of the silver screen. From Charlie Chaplin and Buster Keaton, to Mae West and that zany bunch known world over as the Marx Brothers, are just a few of the characters the author highlights.

But wait! From the funny business of the silver screen, the book goes back in time again to the ancient world to pay a brief visit to the Court Jester, whose role we all know as The Joker in the deck of cards (invented in ninth-century China). Interesting to note that this motley character is not part of the royal family or a member of any suit, nor is he really part of the pack, but yet he’s potentially the most powerful card in the deck. Go figure.

Next stop… Live from Giggles and the wonderful world of standup comedy. The book hits high gear as the author explores some of the heavy hitters including Bob Hope (who first appeared on television before there was television, in a test broadcast in 1932), Milton Berle (reputed to have the largest penis in show business), Mort Sahl (the first standup to make the cover of Time), and Lenny Bruce (need any words be said?), whose incendiary routines paved the way for the likes of Richard Pryor, George Carlin and others.

Not to be left out are the female counterparts in this FUNNY: THE BOOK equation: Lucy Ball, Phyllis Diller, Joan Rivers, Roseanne Barr, and a bunch of others are covered and then uncovered.

Just when you think author Misch is well-entrenched in the modern world and there’s no turning back… Surprise! He once again climbs into his personal literary time machine for another visit to the ancient world. This time to visit the Greeks and the Romans, as well as the Middle Ages and that groovy period known as the Renaissance.

So why do we laugh? According to Misch, “We laugh because something’s familiar and (we laugh) at things we’ve never seen.”

Obviously, that’s the short answer. For the long answer, and to be privy to the scientific and philosophical aspects of comedy from a man who has written and/or produced works for NBC, CBS, ABC, Fox, UPN, HBO, Showtime, PBS, Disney, Universal, and Lifetime, I highly suggest you read the book. It is well worth the time investment (not to mention the health benefits from the dopamine high you will get) especially if “Funny” is something you can, and/or often relate to.

Funny – The Book is available at Book Soup, signed copies are currently in stock!