Latest Issue Is Actually Anti-Humor For Shock Value Only

The latest issue of the famed so-called humor magazine from France shows that in the final analysis, the editors actually have no sense of humor at all, they are political extremists  dishing out leftist agit-prop in the manner of the old dead Stalinist communist international.  If you look at their covers, for years you will not find a lot to laugh at.  It is just sick depictions of Muslims and Christians, among others.  Compare it to American humor magazines, like MAD Magazine.  Even in its wildest issues, Mad never crossed the line of actual depraved political propaganda.  Charlie, you ain’t funny now and you haven’t ever been funny.  A pity some stupid Muslims attacked your office.  You were on the way to propaganda bankruptcy, and suddenly wrapped yourself in victim-hood, and shoveled in millions of dollars from average folks who don’t really understand your game.  If the attack had never happened, you’d be in the unemployment line with the rest of your neo-Stalinist pals.

The latest issue shows God drowning all the Texans because they are Nazis and racists.  Really?  You sick jerks in Paris really believe that?  And you think the whole Hurricane Harvey is funny? 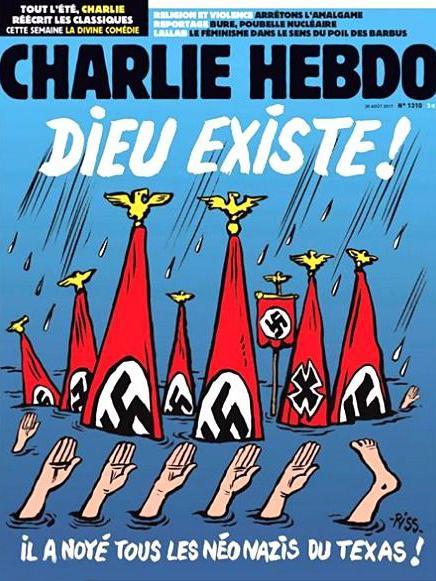 Here’s something that would really be funny:  Watch the fun if a couple of Charlie Hebdo execs show up in Houston to pass out their rag to those in an evacuation center. Ha!  Lights out for the agit-prop boys.  And watch out for them gators as you’re trying to swim away from all those angry “Nazis”!

Here’s what the folks in the evacuation centers really look like:  Americans. I don’t see any Nazis here.  The Charlie boys in Paris must be smokin’ some powerful fear-weed to come up with this one.