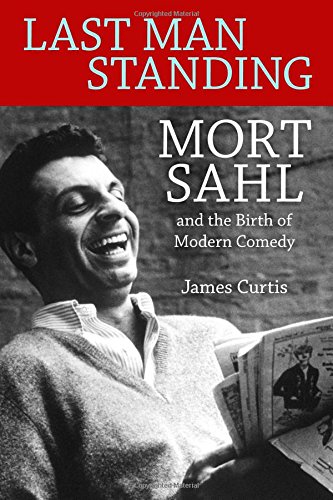 On December 22, 1953, Mort Sahl took the stage at San Francisco’s hungry i and changed comedy forever. Before him, standup was about everything but hard news and politics. In his wake, a new generation of smart comics emerged―Shelley Berman, Mike Nichols and Elaine May, Lenny Bruce, Bob Newhart, Dick Gregory, Woody Allen, and the Smothers Brothers, among others. He opened up jazz-inflected satire to a loose network of clubs, cut the first modern comedy album, and appeared on the cover of Time surrounded by caricatures of some of his frequent targets such as Dwight Eisenhower, Richard Nixon, Adlai Stevenson, and John F. Kennedy. Through the extraordinary details of Sahl’s life, author James Curtis deftly illustrates why Sahl was dubbed by Steve Allen as “the only real political philosopher we have in modern comedy.”

Sahl came on the scene the same year Eisenhower and Nixon entered the White House, the year Playboy first hit the nation’s newsstands. Clad in an open collar and pullover sweater, he adopted the persona of a graduate student ruminating on current events. “It was like nothing I’d ever seen,” said Woody Allen, “and I’ve never seen anything like it after.” Sahl was billed, variously, as the Nation’s Conscience, America’s Only Working Philosopher, and, most tellingly, the Next President of the United States. Yet he was also a satirist so savage the editors of Time once dubbed him “Will Rogers with fangs.”

Here, for the first time, is the whole story of Mort Sahl, America’s iconoclastic father of modern standup comedy. Written with Sahl’s full cooperation and the participation of many of his friends and contemporaries, it delves deeply into the influences that shaped him, the heady times in which he soared, and the depths to which he fell during the turbulent sixties when he took on the Warren Commission and nearly paid for it with his career

If you are on Twitter you can get the Periscope app for free and watch Mort every Thursday night.  His show is only broadcast from the Throckmorton Theater in Northern California.  He is amazingly sharp and recalls many funny incidents from his long career in show business that included writing for films, comedy gigs, writing for JFK, and working with Jim Garrison on the Kennedy Assassination, which got him black-balled from Hollywood.