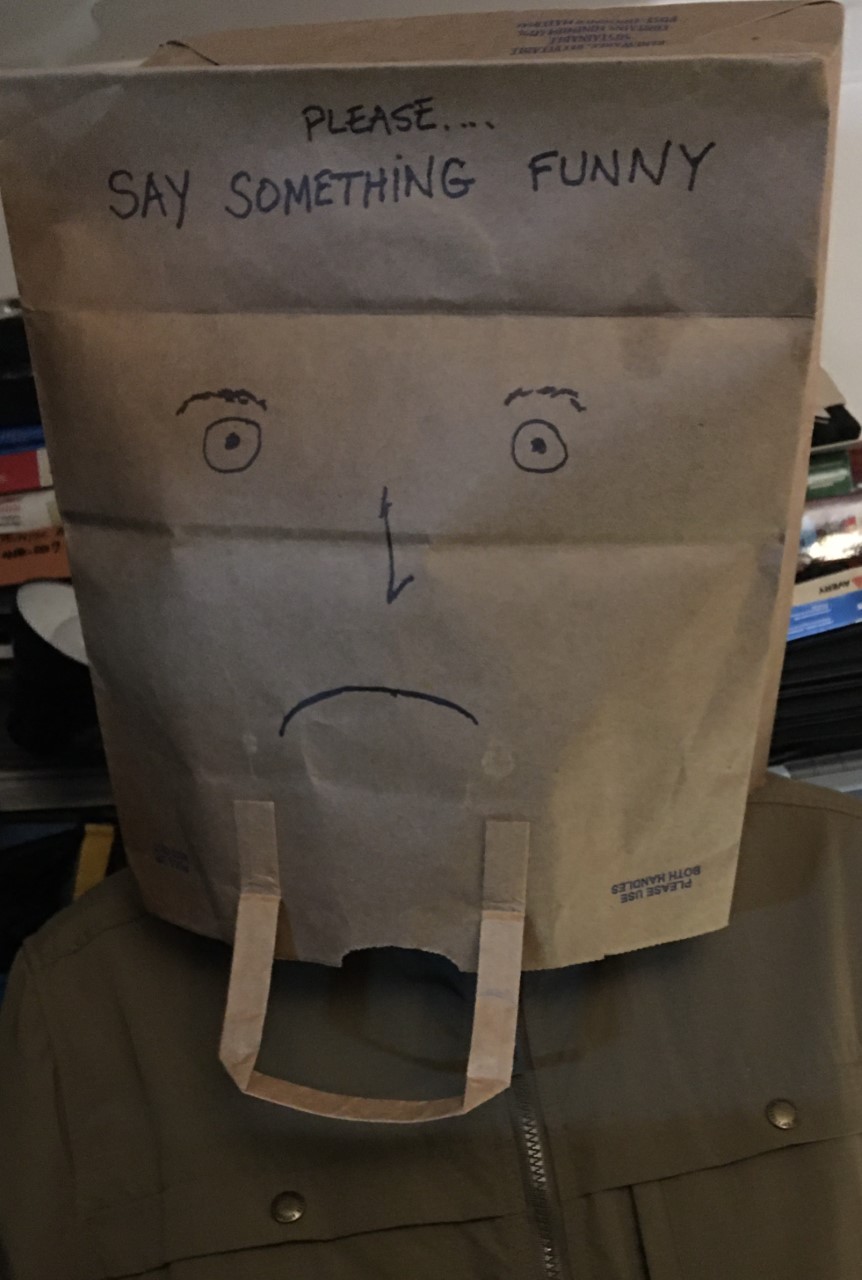 The Unknown Bag Head Has a Beef

“Please, say something funny” is written in black ink on his paper bag face, a philosophical tattoo screaming for help.  The Unknown (and Unknowable) Serbian, who, it is whispered, has comedic constipation, and hasn’t laughed since the Pandemic began in March of this year. “I’m embarrassed to be a human, that’s why I put on the Bag.”

“The dreaded Rhona killed comedy, with a lot of help from our Governor and our local health bureaucrats” he said.  “It wasn’t exactly the virus, it was our reaction to it.  All the fun things in life were closed down: Disneyland, the Comedy Clubs, the Magic Castle, the Movie Theaters, the Play Houses, the Coffee Houses, everything.  Gone with the snap of the finger of a deranged politician in Sacramento, and his little lackey in L.A. City Hall.  This is the Cultural Apocalypse.”

So what’s left?  With Leno gone, it’s just a couple of cardboard comedians on late night and young punks on SNL who tell Trump jokes 24/7.  They’ve all lost their sense of humor.  Trump is not even real, he is a hologram created by an Alien Intelligence who is determined to destroy humor and replace it with a 1984 style authoritarian government where laughing will be punished with fines, and telling a joke will land you in jail or picking up trash around homeless camps.

This conspiracy is obvious, so in your face, or in this case, so in your paper bag head, that who can deny it?  Consider this:

–To prevent even a smile, everyone must wear a mask.  You would never know if the guy passing you on the street is smiling.

–Wearing a mask means even if you laugh it is muffled and nobody will hear you.

–The Lock Down, like in a prison, prevents men from gathering anywhere, and all venues, clubs, even parks, are closed down.  If you are caught with others not in your immediate family, you can be cited.  Things will escalate, soon you will be beaten to a pulp and eaten by aliens for that transgression.

–Gavin Newsom is an Alien-Human Hybrid.  His relative Nance Pelosi is over 600 years old, and is known to live on a diet of parakeets and centipede legs.

–The Aliens are the only ones laughing.  Those pencil-necked geeks are howling, screaming belly laughs at the things they are getting humans to do.  They really got off when they created the first toilet paper shortage.  Humans fighting over the rolls in markets, stocking up hundreds of packs in their garages.  These Aliens don’t defecate themselves, their systems are different, so humans dealing with toilet paper is hilarious to them.

–Every week they announce a different product shortage, then howl as they watch humans scramble around to stock up, or be emotionally racked up when they can’t get enough of something like taco sauce. Humans wait in lines at markets for hours, griping and grousing.  A double-knee slapper for the ETs.

–The final Takeover is coming soon.  It may be the vaccine, or something in it.  Something will happen, humans will start mimicking apes and walking on all fours, or crawling around on their backs, throwing the Aliens into apoplectic laughter.

–The Unknown Bag Man says the only solution is to throw off your mask and Say Something Funny, make a joke about THEM, humiliate those ugly critters and they will scurry back to their own planet. The Unknown Bag Head has discovered that these ETs cannot take a joke that is directed at them!  Make fun of them and they are done.   Only then can an Army of Humans march on Sacramento, grab the Hybrid Newsom, put him in a hot air balloon and send him toward the Arctic wearing shorts and a Tommy Bahamas shirt.