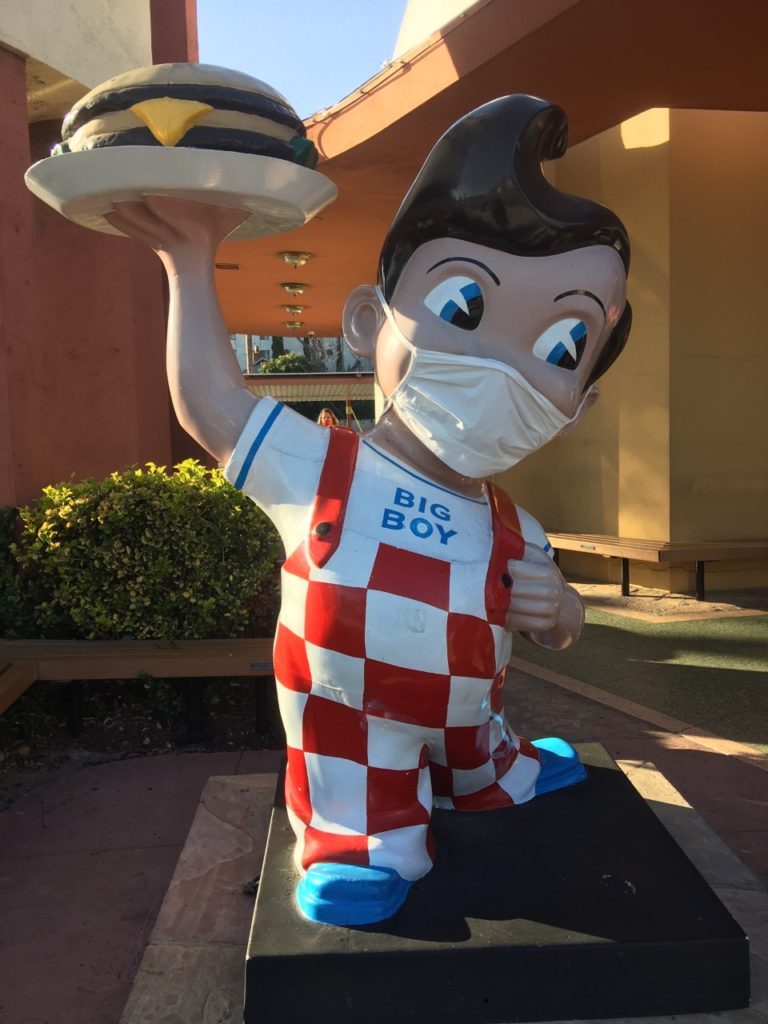 A raging mob of skinny vegetarian protesters toppled a statue of the famous “Bob’s Big Boy” in Topeka, Kansas, last night. They did this by tying ropes on the statue that stood in front of the local Bob’s Restaurant, one of many in the world famous chain. Bob’s was started in Glendale, California by a local high school student in 1935. His burgers were so good that his little burger stand grew into a huge chain. The logo, a plump, happy white fellow, became a beloved figure to millions of people of all colors who flocked to the restaurant for one of his delicious hamburgers.

“We are just devastated by the riots last night,” said Freddy Spamsucker, the manager. “These mobs were vicious. They broke our windows and then tied ropes to the statue of our Big Boy out in front and pulled it off the pedestal and dragged it away.” The statue was last seen being dragged toward New York, where it will probably end up in a tony art gallery with a big price on it.

The night of violence did not end there, however. Angry diners, allegedly Bob’s customers, poured out of the restaurant with guns blazing and shot 33 protesters dead. Bedlam ensued, and the police were called. However, before the police arrived on the bloody scene, a pack of ravenous, rabid Kansas prairie coyotes came out of nowhere and dragged off the bodies of the fallen protesters. Goofus McKinnley, Lt. In charge, said that the police have not been able to retrieve the bodies. “We don’t even know the names of the deceased rioters,” said officer McKinnley, “but you betcha we’ll find out.”

The police are organizing a search and rescue party to look for the missing protesters. Under an old Kansas law that dates back to the Civil War, the families of “rebels” can be held financially responsible for the deeds of their dearly departed. Vegetarians were declared “rebels” last year by the Governor, as they don’t eat pork products, and are therefore considered a threat to society. The skinny vegans, afraid of the consequences of the “Rebel Law”, have gone underground. They have even taken to stuffing crumpled-up newspapers under their clothes to appear to be on the plump side, like most of the other farm community residents. “They have managed to blend in with the population, “ said Police Sgt. Jethro Roughbarn. “but they don’t fool me, I can spot one of those phony ham eaters a mile away.” According to Sgt. Roughbarn, the vegetarians have taken to stealing newspapers out of news racks in order to make their women look plump. “There’s a reward from the Topeka Farm & Orchard Gazette for information on the criminals who are stealing their news sheets,” he said.

Meanwhile, restaurant manager Spamsucker also offered a reward of $300 for the return of the Big Boy statue. Rumors from the vegetarian community was that the offer was immediately rejected. “We have other plans for Mister Big Boy, said “Mellissa” a spokesperson for the vegetarian underground. “We’re tired of the fat White Boys who run this country,” she said. She warned that the “String-bean Woman’s Collective” has joined forces with the “Emaciated Shadow Men’s Punk Band” to take over the entire U.S. Government. They are braced for a long protracted fight.

“There’s never a dull moment here in Topeka,” said one bystander, who wishes to remain anonymous.